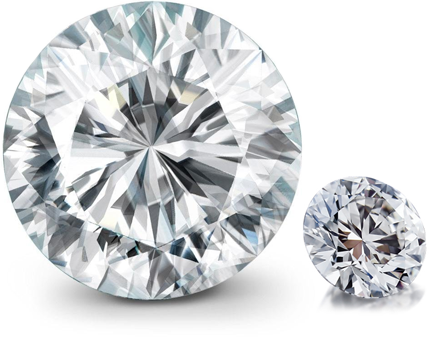 Let’s start with a quick re-cap of the difference between a natural diamond and a synthetic diamond. Both have the same visual, elemental and physical properties, but they come into existence in very different ways.

Natural Diamond: Diamond which is formed within the Earth over billions of years.

Synthetic Diamond: Diamond which is grown in a factory.

How do you grow a diamond in a factory?

HPHT synthetic diamonds start life as a seed! This seed is a crystal of natural or synthetic diamond, which is placed in an industrial tank. The seed is then subjected to extreme conditions – yes, you’ve guessed it! – high temperature and high pressure, along with a chemical “catalyst” which speeds up the growth. With the right conditions carbon atoms crystallise around the “seed” and synthetic diamond is formed.

Synthetics produced by HPHT are generally yellow/brown/bluish in colour as it is harder to produce colourless synthetic diamond by this method.

CVD synthetics are grown in a high pressure, chemical reactor. At the bottom of the reactor is a plasma surface made out of natural or synthetic diamond, or sometimes even silicone. Carbon, in the form of gas (usually hydrogen mixed with methane!), is then pumped into the reactor where chemical reactions cause carbon deposits to build up on the plasma surface. This is the CVD synthetic diamond growth.

What is the difference in value?

I find it useful to draw a comparison with art. An original Picasso painting is an extremely valuable piece of art, a one-off piece created by the man himself. You can also buy a mass-produced print of that painting, it looks the same, but it is ultimately a copy with no intrinsic value. This same comparison could be made between natural and synthetic diamonds. The head of fine jewellery at Dior (Victoire de Castellane) recently said to one magazine: “….if you can make a lot of them, how is it going to be precious?”

And the environmental impact?

In the recent past you would often hear of synthetic diamonds being labelled as the “eco” or “sustainable” option for diamond jewellery. However, pursuant to a large-scale study which was commissioned earlier this year to assess the socioeconomic and environmental impacts of diamond mining, we can see that this is simply not the case. They found that the “Greenhouse Gas Footprint” per one carat of polished natural diamond is 69% less than the estimated carbon footprint of factory grown diamond.

In fact, in April this year the U.S. Federal Trade Commission (a U.S. body which investigates allegations of deceptive advertising) sent warning letters to eight synthetic diamond companies. The issue? The use of “eco-friendly”, or similar terms, to describe diamonds made in a factory, using a process that requires very high temperatures and emits a multitude of fumes into the environment.

That’s not to say traditional diamond mines are carbon angels! I think most believe that traditional miners should reduce the environmental impact of mining by, for instance, using more renewable energy. This is a very lengthy debate, and I could go on but I’ll leave that for another day!

How do I make sure my diamond isn’t a synthetic?

Both HPHT and CVD synthetics diamonds do have certain physical features which (under magnification) can be used to differentiate them from natural diamonds… However, these characteristics are often subtle and difficult to spot even for a trained gemologist. A safer way to be sure your diamonds is indeed natural is to use a synthetic detection machine. They are not cheap, but all good diamond suppliers will own one. Here at Celsteel this is a vital piece of equipment for us to ensure that we only buy and sell natural diamond.

I hope this has given you a bit of an insight into how synthetic diamonds are produced, identified and valued. I have tried to keep it as brief as possible, but if anyone is particularly interested in the topic, I’d be happy to share more! Just send me an email to info@celsteel.co.uk

Have you lost your password? Please enter your login email.