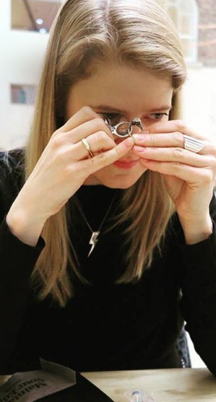 Industry Voices: Being a Women in the Diamond Industry

It’s not a job title that you hear every day, and it certainly isn’t a job title that you generally associate with a 30-year-old woman. The jewellery industry, especially the diamond wholesale side of the industry, is heavily dominated by men. Over the last couple of years, the trade has become increasingly aware of this, and I have been delighted to see lots of impressive women rallying together to combat what has been dubbed the “pale, stale, male” epidemic.

Earlier in the year I took part in a panel with several inspiring women who shared their experiences of working in the jewellery trade. It was fascinating to hear how each experience was totally different, yet there was one consistent theme: we need more women at the forefront of the industry.

One participant recounted her time at an exclusive jewellery house, where she was one of many women in the work force. Day-to-day she was working with and around women, but all the ‘top dogs’ were men. Of course, sometimes this happens by luck of the draw, but personally I still can’t shift the feeling that unconscious bias plays a big role here.

The evening’s host, a very successful jewellery designer, shared the troubles she had when negotiating the lease for one of her new retail spaces. In the end, she reluctantly took along her Dad and the landlord spent the meeting addressing the negotiations to him. Her eponymous brand has a celebrity following and already has shops in various prestigious locations, but this wasn’t enough to convince this older male landlord to take her seriously.

I myself am lucky to work regularly with many older men who do not appear to exhibit this bias and respect me as they would any of their same-sex contemporaries. Unfortunately, outside of that circle, I have discovered that this is not commonplace: there just seems to be an inherent lack of trust. Seemingly the default position is to view me as the “little girl” who has joined the family business to help out, rather than the young woman who is here to run the business and take it from strength to strength.

Assigning blame is unhelpful. The oversimplified crux of the matter is that if men have no experience working alongside women in the top jobs and more importantly, day to day, we cannot expect women to slide into the picture harmoniously, as if we’ve always been there. From what I have seen there is certainly recognition (on both sides) that men and women have differing management and working styles, and that’s fine, in fact it’s crucial to modernising the industry. Variety is the spice of life and (let’s be honest) a bit of spice is what this industry needs in the coming years.

The solution to this imbalance? Infiltrate the industry. As women, let’s promote, support and lift up other women. Let’s educate, let’s innovate, let’s amplify our voice and put women on the jewellery radar. We’re not looking to, as Beyoncé would say, run this mother******* world. We’re just looking to run half of it, and to be taken seriously when we do so.

Have you lost your password? Please enter your login email.